The cheque refuses to be cashed without being thanked first.

One cow has skidded down the meadow and tipped over.

By the time I find her, her skull is a metropolis, her hooves sunning themselves.

The ghost of my father has fixed the fence but we keep breaking it with a gate.

He haunts with the oddest things. The plow, for example, bucked when it saw the rig.

The family’s never been closer. Fire does that. It’s an invitation to gather.

The cheque refuses to haunt so the money doesn’t last.

My father has skidded into a meadow, you wouldn’t know him but for the thistle.

The plow has cleared our talk of complaint so we sit with this loss, sunned.

The fire has never been closer. I gather the family. Family does that, it gathers.

Sue Goyette lives in Halifax and has published five collections of poems and a novel. She currently teaches in the creative writing program at Dalhousie University. 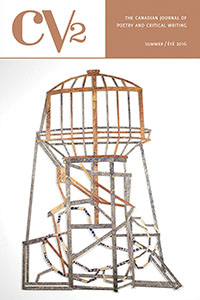 This piece was published in Water, the Summer 2016 issue of CV2.