and then she emerges

on the corner of peel & maisonneuve, her

city legs tired and out of kilter.

she has been lost in the forest:

picking blackberries against trees that

have lived here long enough to have watched

she was new to the forest – before that, the sea:

singing into the wind,

her voice caught and pulled into the

and the murmurs of a deep wide strait.

they tried to tame the waves, once.

she watched the currents crash against the island

with the world swept up in their crests.

she is swept onto the corner of peel & maisonneuve, her

city hands cracked and calloused by the forest

where she fell in love over and over again,

first with the sitkas, then with the lichen,

then with the boy who knew all the hidden paths:

the forest, where she sat in the trees

with mosses and saltwater in her hair.

and now she emerges

on the corner of peel & maisonneuve and

shoots up tendrils along the skyscrapers and

green growing across the eaton centre and she keeps growing,

and suddenly her city legs are branches

wound around the sidewalk blocks,

getting in the cyclists’ way,

and her city hands are leaves trying to find the sky.

the next metro will stop. another woman

will climb out of the station,

for she has been in the forest too long.

Tazi Rodrigues currently lives in Tiohtià:ke/Montreal. Her work, which is rooted in transit, has previously appeared in Room and Vallum Magazine, amongst others. 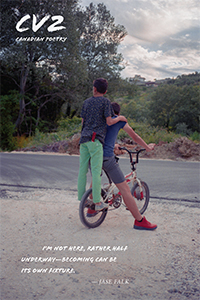 This piece was published in Emergence, the Fall 2019 issue of CV2.