Sylvia Legris’ poems in this issue of CV2 are from her yet-to-be-published collection Pneumatic antiphonal, other poems of which have appeared in New American Writing, Conjunctions, and Prairie Fire. 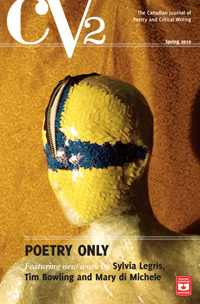 This piece was published in Poetry Only, the Spring 2010 issue of CV2.