scrabbled down the hallways yelling “Yahtzee!”

I brought books on Hopper, and the Arctic,

something called “The Politics of Lonely,”

a toothbrush and a quick-pick with the plus.

You tried not to roll your sunken eyes,

Pointed at the camera in the ceiling.

I climbed up, blocked it so they couldn’t see.

Turned to find you out of bed, and kneeling.

Before the nurses came, took you away,

I stood there on a chair and watched you pray.

John K. Samson is the singer and songwriter for The Weakerthans, an acclaimed rock band. John’s poetry and prose has appeared in Matrix Magazine, Geist, The Believer and Post-Prairie: An Anthology of New Poetry. He lives in Winnipeg, Manitoba, where he’s also the managing editor and co-founder of a small publishing house, ARP (Arbeiter Ring Publishing). His first solo album, Provincial, and book, Lyrics and Poems, 1997–2012, were released in January 2012. 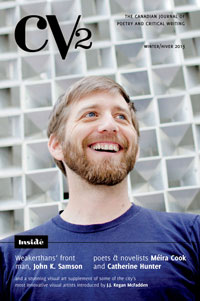 This piece was published in No Place Like Home: A Winnipeg Issue, the Winter 2013 issue of CV2.